The Split Personality of America

Some Americans think of their country as “the home of the brave” but on closer inspection that is only half true. And to be more precise, it’s the western half. Look at this map of Neuroticism based on data compiled by psychologist Peter Rentfrow, 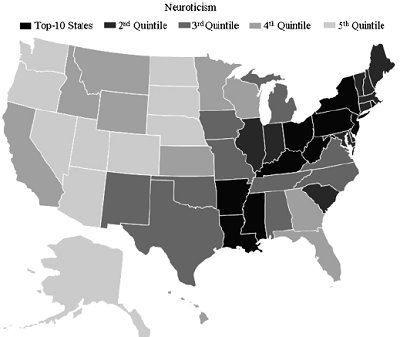 Neuroticism by state. The darker, the more neurotic.

Unlike the maps of the other Big Five personality factors, this one shows a very distinct pattern. It splits the nation into two halves – a fearful East and a bold West. The border seems to go along the Mississippi river. The 20 states scoring highest on Neuroticism are all bordering to the river or east of it. Of the 20 states that score the lowest on this trait, 16 are in the western region – including all of the bottom 10. Why Mississippi? I think we can find a clue if we look at an older map, 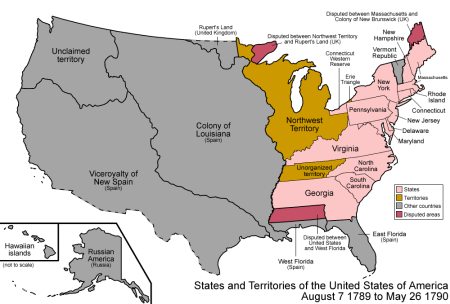 This is what America looked like in 1790. As you can see the western border of America went along the river that today appears to separate Americans scoring high or low on Neuroticism. But why should this be? Most likely because up until around 1800 almost all immigrants came, at least partly, to avoid religious persecution.

This is what I referred to in my previous post, the review of Susan Cain’s book on introverts, as an explanation for how the early America had a Culture of Character, although I guessed that the early settlers would be introverts rather than neurotics. These traits are of course similar and Cain admits that her view on Introversion incorporates what others view as Neuroticism.

At any rate, the second wave of immigrants were not so much fleeing Europe to avoid persecution. The were lured by the land- and goldrushes and other hopes of fortune and glory. They were the frontiersmen and women who ventured out in the hostile and uncivilized terrorities of what is sometimes called the Wild West. They were, in other words, not high on Neuroticism. Most likely, this latter wave of immigrants were also Sensation Seekers although this trait or anything similar to it is not covered by the Big Five model that Rentfrow uses.

While lot’s of people have moved around within America since the early days, the pattern shown in the first map does suggest that these two breeds of Americans – stick people and carrot people – still exist today and that they to a large extent live where their ancestors first settled. This serves as an interesting example of how it can be that one people differs from another and how even within a nation you can find a cultural and behavioral variety that has a genetic basis.

In the future we will probably see even more patterns like this one emerging as more or less intentional communities arise when people to a larger extent can choose their own environments. And who knows, as people become more aware of the genetic basis of their newfound tribes, this trend may even split our species. Let’s call the first bunch to branch off Homo Mississippiens.

This entry was posted on Monday, April 29th, 2013 at 12:20 and is filed under Demography, Human Biodiversity, Personality, Religion, Society. You can follow any responses to this entry through the RSS 2.0 feed. You can leave a response, or trackback from your own site.

13 Responses to The Split Personality of America