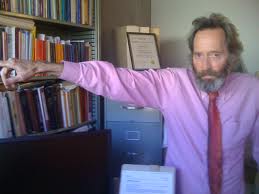 Looking for the anthology on existentialism, or maybe just his stash of weed.

Whatever you think of the Big Five personality model, most of its traits are easy to understand. Extraversion, agreeableness, conscientiousness are all pretty much what they sound like. Neuroticism is a little more problematic since it deals with emotional instability but only in regard to negative emotions, but it’s still easy to understand what it means – being anxious, worrisome, sometimes depressed. But then there is openness to experience. You’d think that would be equally straight-forward: being into new experiences, like travelling and experiencing other cultures, having broad interests, making new friends, maybe sexual experimentation and trying drugs as well. Not so much.

Here is a list of words and phrases that psychologists feel characterizes this trait,

And here are some test items that measure openness,

Have a rich vocabulary.

Have a vivid imagination.

Am full of ideas.

Carry the conversation to a higher level.

Catch on to things quickly.

Love to think up new ways of doing things.

Am good at many things.

Do not have a good imagination.

Will not probe deeply into a subject.

When looking at these items, it’s pretty easy to notice two separate factors, one of intelligence,

Intellectual, have a rich vocabulary, quick to understand things, spend time reflecting on things, catch on to things quickly. (Whoever makes these tests clearly has a thing for the word “thing”.)

And one of creativity,

Have vivid imagination, have excellent ideas, full of ideas, love to think up new ways of doing things.

This is not something I personally discovered just now. Already back in 1981 psychologists John Digman and Naomi Takemoto-Chock analyzed the openness factor and found two sub-factors, “one of which appeared to be concerned more with intelligence, the other with matters of culture.” Others have referred to these factors as “reflection and curiosity/experimentation/hypotheses testing.” (Couldn’t find a link to the article so if you have one please let me know.)

Not that there is anything wrong with combining two traits into one. The trait of psychopathy is a combination of impulsivity and lack of empathy. That’s a meaningful construct because while both factors are relatively harmful the combination produces a type of person that make up less than one percent of the population but 20 percent of all convicts. And many of the other prisoners are afraid of them. That effect makes it a useful construct.

Openness, however, is supposed to be a broad factor of personality, a basic building block that only breaks down into aspects of itself, so-called facets. Like the shades of a color. Although some facets of other Big Five factors are questionable, the overall picture is clear – they are really aspects of the same thing, not combinations of essentially different traits. The same goes for broad factors of other models, like those of Eysenck, Cloninger or the MBTI, based on Jung’s theory.  So you might say such a factor is a contradiction in terms – it’s not broad or basic, it’s narrow and specific.

The Correlates – In Search of the Je Ne Sais Quois Factor

Unless of course you think of intelligence and creativity as two aspects of some underlying factor that is for some reason called openness to experience. But what would that factor be? We all know what conscientiousness, agreeableness, neuroticism and extraversion boil down to, but what is the core of openness to experience? It’s clearly not being literally open to experience because sensation seekers and the similar novelty seekers are very open to various experiences and measures of those only correlate modestly with openness. Perhaps the behavioral correlates of openness can give us a hint. Unsurprisingly, it correlates to measures of intelligence and creativity but that’s to be expected since it measures exactly those traits in the tests. Is there some other correlates that suggests an underlying factor behind both of these?

Liberal values. A liberal attitude has consistently been linked to openness (as has conscientiousness to conservatism). There is some research to suggest that liberalism is linked to intelligence, although this study is of moderate quality. And artists, generally thought to be a liberal group, do score about half a standard deviation higher than non-artist according to a big meta-study made by psychologist Gregory Feist. So this correlate clearly supports the idea of a two-factor trait rather than an underlying factor of openness.

Entrepreneurship. Openness appears to be a part of the entrepreneurial personality (along with high extraversion and conscientiousness and low agreeableness and neuroticism). But this is almost by definition a matter of creativity and most likely to some degree intelligence, so again nothing lurking beneath these two factors.

Migration. People high on openness tend to move around more, both within and between countries. Could be something beyond intelligence and creativity. I don’t see it, but let me know if you do.

Extramarital Affairs. This has not been properly established. There is a huge global study on this that found no link between openness and infidelity. (Instead it found this to be a matter of low agreeableness and low conscientiousness.)

Trying new foods. This sounds like creativity maybe in conjunction with a liberal appreciation of other cultures.  And of course a bit of sensation seeking since as I mentioned before this trait has a modest correlation to openness.

Tattoos and piercing. I haven’t found any evidence that this relates to intelligence or even creativity. On the other hand, what underlying factor of openness would it be an indication of?

Dreams. People who score high on openness remember their dreams and often use their dreams to solve problems. This may be something that isn’t just a matter of intelligence or creativity or a combination of both. I have yet to see any research to confirm it but it’s a possibility perhaps suggesting that openness is some form of transcendent quality.

Spirituality. This somewhat vague dimension of religiousness, often defined more as a quest than a belief, has been found to correlate with openness.

Schizotypy. This trait, which is basically schizophrenia light, is also linked to openness.

This certainly looks like a candidate for an underlying factor but it’s most likely not. In a large high quality study of religion and intelligence, psychologist Gary Lewis found a correlation between spirituality and IQ of -0.05, which he generously refers to as support of the stronger inversed relation found by Kanazawa and others, but in reality it indicates that there is no relation between the two whatsoever. Other research has shown schizotypy to be linked to creativity so it would seem this mystic component belongs in that sub-factor.

Susan Sarandon – the poster girl for openness. Looks nice, like a mix between a Disney character and Mona Lisa.

In Any Way Useful?

But even if openness fails miserably, in my opinion, as a broad factor of personality it could still be useful. The two-factor trait of psychopathy has relevance in many situations, indeed, no one would find it irrelevant to know if the person in front of them is a psychopath or not.

Sadly, this doesn’t seem to be the case with openness. The correlates I’ve mentioned above represent a large portion of what we know about this trait. And they don’t suggest any real need for this trait at all. They can all be reduced to either intelligence or creativity or a unsynergistic combination of the two. With the possible exception of something like migration and tattoos and piercing. Compare this with just a few correlates of conscientiousness like divorce rate, overweight and health, school and work performance and leadership. It’s just very hard to understand what use psychology (or anyone) can have of the trait openness to experience.

Mirror, Mirror on the Wall

And yet, if we combine all the features and correlates into a portrait we might find a clue to have this trait has become so prominent in personality psychology. The open person is of high intelligence and presumably also creative. He (or she) is a liberal with interests that lean more towards the humanities and soft science than hard science. He is not an atheist but also not part of traditional religion – a searcher rather than a dogmatic person. To me, this sounds a bit like a well-educated hippie, a White Californian, like for instance the always interesting blogger Santi Tafarella. But more than anything else, it sounds like a psychologist.

This entry was posted on Tuesday, November 5th, 2013 at 18:41 and is filed under Arts and Culture, Education, Personality, Politics, Psychology, Religion, Science. You can follow any responses to this entry through the RSS 2.0 feed. You can leave a response, or trackback from your own site.