At the highly liberal Salon.com, contributor Richard Cooper is criticizing the superhero trend in movies. The superhero, Cooper says, is “essentially a fascist concept.” Superheroes are the worshipped strong leaders who by their innate superiority rule over the weak-willed masses and fight their enemies with force and often cruelty. At the same time Cooper acknowledges that he enjoys this genre,

…why can’t I stop watching these movies? Because my imagination is shaped by superheroes: fights and chases are iconic, mythic triggers for me.

He ends the article with a wish that someday there will be a more liberal superhero who uses his intelligence rather than force and who reforms society rather than conserves the established order. Like Recycle Woman or Organic Food Girl?

Archetypes – The Elements of Stories

Don’t get me wrong; I recycle and I eat a fair amount of organic food too, even kale. That’s my choice. But when it comes to storytelling, we don’t have as much choices as we might think. Stories in all known cultures and in all historical records, sometimes going back thousands of years, display certain common elements. Swiss Psychiatrist Carl Jung was among the first to discover this and he called these universal elements archetypes. In his book Man and His Symbols, he describes the archetype of the hero like this,

The universal hero myth, for example, always refers to a powerful man or god-man who vanquishes evil in the form of dragons, serpents, monsters, demons, and so on, and who liberates his people from destruction and death.

These hero myths vary enormously in detail, but the more closely one examines them the more one sees that structurally they are very similar. They have, that is to say, a universal pattern, even though they were developed by groups or individuals without any direct cultural contact with each other—by, for instance, tribes of Africans or North American Indians, or the Greeks, or the Incas of Peru.

And it’s not just the hero; there is a whole bunch of archetypal characters and motifs that can be found all over the world as well as in extinct cultures, such as the Wise Old Woman, the Trickster, the Flood, to mention a few. Jung concluded – quite correctly I believe – that the reason why these characters and motifs are so similar across different cultures must be that they are a part of innate human nature.

So it seems like archetypes are something like hardwired predispositions, and that a good story is one which will resonate with this wiring. But this begs the question: why is Cooper and people like him dreaming about stories that aren’t archetypal and don’t resonate within us? Well, obviously his political views contrast with the archetype of the hero. Even though he appreciates the “mythic triggers” of the archetype he is still dreaming of something else. The question then becomes why does anyone have political views that, at least in part, go against their nature?

One explanation could be that he and his ilk represent a different kind of human nature. Personality psychology has shown that there are plenty of individual and group differences. One such difference, perhaps the most important, is the variation on a dimension of traditional versus modern. This dimension has been explored by among others social psychologist Jonathan Haidt in the context of his Moral Foundations Theory, although he usually talks of conservatives and liberals instead. According to Haidt, we base our moral judgments on six moral foundations – Care/harm, Fairness/cheating, Liberty/oppression, Loyalty/betrayal, Authority/subversion and Sanctity/degradation, but we vary in how much we rely on the different foundations. He found that traditional people – non-Westerners, conservatives, children, uneducated and lower class people – rely on all these foundations fairly evenly, while modern people – Westerners, liberals, adults, educated and upper class people – are much more limited to mainly Care/harm and to a lesser degree Fairness/cheating and Liberty/oppression.

What Haidt says about these foundations is essentially what Jung said about his archetypes – that they are not a matter of choice but a part of human nature, an innate way of thinking, although Haidt clearly states that the moral foundations are a product of evolution.

Another version of the traditional/modern dimension is presented by blogger hbd* chick, who distinguishes between clannish and modern peoples, a difference that she theorizes is based on inbreeding. The clannish peoples are those who have been inbreeding for a long time and live in extended families where everyone is closely related. This means that they can pass their genes to the next generation through close relatives to an extent that others for obvious reasons can’t. So an inbred clan of highly interrelated people will display a huge amount of group loyalty, not just for the closest relatives but for the entire clan – and that in a nutshell is what clannishness is. And since they do everything together that naturally leads to a conservative and traditional lifestyle with little or no individualism that could threaten the group coherence.

At the other end of this dimension we have those peoples who have outbred for a long period of time and for this reason become less interested in family and instead more individualistic, but also more inclusive and civic-minded since the view more people as ingroup members. These modern peoples are most notably those of Northwestern Europe and their descendants.

Both moral foundations theory and the theory of clannishness suggest that the modern person is partly detached or elevated from his innate tendencies. The moderns in Haidt’s theory have to some extent abandoned the three moral foundations that most of us view as the most traditional, old-fashioned or even primitive – Loyalty, linked to the tribal or outright clannish behavior, Authority, linked to the idea of innate superiority, and Sanctity, the foundation linked to religious belief. In a similar way, we find that the peoples who have outbred for a long time have weeded out the genes responsible for familial altruism and evolved into (relatively) free thinkers. These peoples started the Enlightenment and to this day democracy and human rights are strongest in their nations.

Now, given that a modern person is partly freed of moral foundations and clannishness, it would make sense to argue that such a person is also partly freed from his archetypal predispositions too. Because archetypes are so intertwined with these concepts it would be impossible to disentangle them from each other. The archetype of the hero alone incorporates many of the traits and concepts that the traditional/modern dimension is based on. He clearly represents Authority, but also Loyalty/Clannishness as the person who unifies the group, and Sanctity as he is often a half-god.

This means that if the modern person is relatively free from conventional morality and clannish/tribal tendencies, he is also less prone to archetypal thinking, which should make him a pretty poor storyteller.  And yet the film industry is full of modern people. How can that be given that film is the prevailing art form for storytelling? Short answer is that they are bound by the laws of the free market which forces them to make archetypal movies. But there was a brief period of time when modern people were dominant in Western culture – the 1960s and 1970s – and they could do pretty much as they pleased. They made arty, existential, surrealistic and generally experimental films. Given the amount of modern films created during this period the film studios no doubt thought it was the next big thing. But like any stories that lacks that archetypal magic, they appealed to the critics – a group that is clearly modern – but they were never a big hit with the broader audience. This is well illustrated in the IMDBs rating of the top 250 movies, as you can see from this chart, 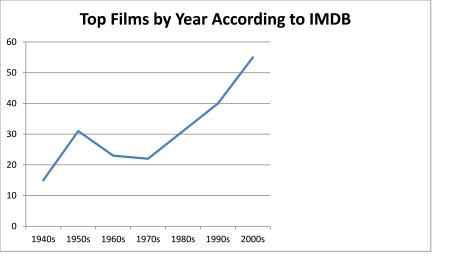 The overall trend is towards increasingly better movies. This inflation is most likely because anyone can vote and most people have short memory and live in the moment – a lot of those who vote have probably never seen a movie from the 1930s or 1940s. But even so, we can see how the films of those modern decades rate lower than the surrounding decades. The same effect can be found in the critic-based ratings of Rotten Tomatoes top 100. 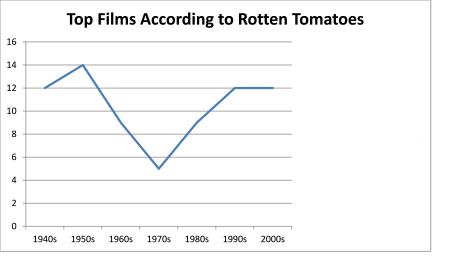 Critics have better memory so there is no inflation here, and as I said before, they are also more modern than the regular audience – and yet they too show a similar dislike for the movies of the 1960s and 1970s.

So the modern people of the film industry were left with no choice but to go back to making archetypal movies. And somehow they manage that pretty well. This may seem illogical but it illustrates another important aspect of the traditional/modern dimension – while traditional people are stable (rigid or stuck in their ways you could say), modern people are imbalanced. This is because being traditional is relatively easy – you rely on your traditions and the social support of your group. Being modern means you have to make your own decisions with no traditions to guide you and with little or no advice from like-minded people. In reality, this often fails and the modern person is constantly falling and when he does he falls back into some form of traditionalism. One example of this is the rich feminist who insists on gender equality but marries one of the very few men who is richer than her. Another is the multiculturalist with a recurring daydream of having a Black friend, but who pays good money to live in a White neighbourhood. They are usually in denial about these regressions into traditional living and will perform rituals and charades to convince themselves that they are true to themselves.

These charades naturally find their ways into the movies too since they enable film makers to make good movies while maintaining a positive self-image. A great example of this is the movie The Kids Are All Right (2010), written and directed by archliberal Lisa Cholodenko. The movie begins with a modern family of two lesbian mothers who have one biological child each, both from the same sperm donor. And so the film unravels without any reference to their biological father because the modern view is that blood is not thicker than water? No, the kids look up their father and the whole movie is about the dynamics and conflicts between him and the family. And then, right at the end of the movie it is as if the director suddenly remembers that she is a modern person, and makes a scene in which Nic, one of the lesbian mothers, argues with the biological father, Paul, and tells him that the children are not his and that if he wants a family he should get his own. And as soon as Paul is out of the picture Cholodenko hastily wraps things up since the archetypal energy is gone. Audience captivated, self-image preserved, mission accomplished. The critics, who share the director’s predicament, were even more enthusiastic than the regular audience. It was a complete success – except for those last minutes after Paul has left and that energy is gone but a scene or two are needed for a proper ending.  Everyone knows the movie is over and yet it’s just awkwardly hanging around. Or put differently: being modern.

No wonder these guys need therapy. Or superman,

This entry was posted on Monday, December 9th, 2013 at 13:39 and is filed under Arts and Culture, Film and TV, Gender Issues, Human Biodiversity, Personality, Psychology, Society, Uncategorized. You can follow any responses to this entry through the RSS 2.0 feed. You can leave a response, or trackback from your own site.