Not really a Christmas song, but since they tend to be so cheesy or worn out I went with this old Bob Dylan song instead,  here sung by the lovely Sarah Jarosz. Enjoy, 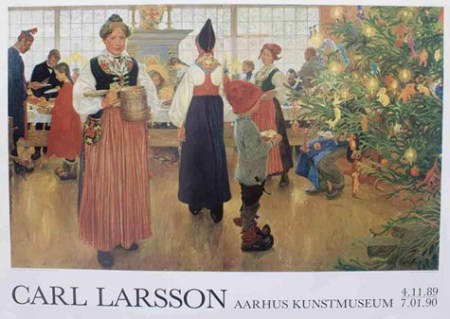 This is a typical example of the work of Swedish painter Carl Larsson. He is my country’s Norman Rockwell, painting Sweden as an innocent idyllic and happy place. Larsson himself grew up in extreme poverty, his father was a choleric alcoholic. So no happy childhood Christmases for him.

But his teacher (he went in a special school for the poor) spotted his talent and recommended him to an art school and he eventually became one of the big names in the 1800s. He never painted anything from his miserable childhood, but there are lots of children in his paintings, living the happy childhood he never had.

I don’t know if that’s messed up or not. We all deal with life in our own way. I just thought it was an interesting background story when you look at the picture. A lot of people struggle to be happy at this time of year, even a man like  Carl Larsson who became emblematic of an idyllic Christmas here in Sweden. That boy decorating the tree, that was never him.