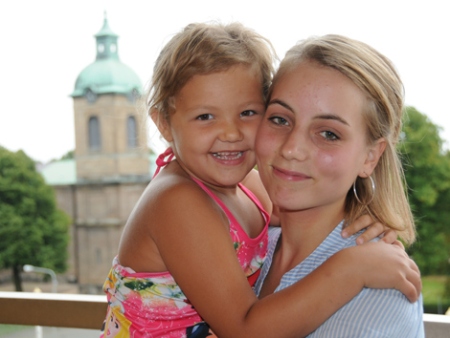 I’ve said it before and I’ll say it again – people don’t change. All research shows that there are small changes over the lifespan, and they follow a pattern of maturation: we become less impulsive and more conscientious and emotionally stable as we grow older.  And rank order is intact, so that the most impulsive person in your class is likely to be the most impulsive at the reunion even though he or she isn’t as impulsive as they used to be.

But how about really extreme experiences? We know that drugs and head trauma can change a person for the worse. Could something equally intense but less destructive also create a change, maybe even for the better?

Last summer, Carolina Sandell (link in Swedish only), a 24-year old mother of two noticed a fire in an apartment opposite to hers. In the window she can see a  4-year old girl, Nellie, trapped by the flames, and the girl’s mother in the yard below screaming in despair. Carolina runs down to the yard and climbes up 15-20 feet up on the downpipe, explains to the girl how to open the window, gets her onto her back and slides down, falling the last stretch and lands on the stone floor, both unharmed.

Now 15-20 feet may sound like a moderate height but statistics show that the risk of dying , for an adult, is more than 10 percent, and serious injuries are also common. With a child on your back it’s probably a lot more dangerous.

And here is the thing: before her act of heroism Carolina describes herself as “a grey mouse” with little sense of self-worth, who had no time for anything outside her family, having lost almost all her friends, and then divorced. But afterwards she transformed into an outgoing,  sociable, and adventurous person. She took her driver’s license, a diving license, joined a local amateur theatre. And she is determined to become a fire fighter.

Seem like she is off to a good start.

It’s hard not wonder if something like this can in fact change a person. It’s so rare that it would be hard to research it. It’s like psychologists David Buss and Randy Larsen write in their textbook, Personality Psychology (a great book by the way) that you can have the trait of heroism all your life without even knowing it.  Stories like this one suggest that there may be fundamental change for the better in some exceptional cases. And it’s also a form of poetic justice (for lack of better word) in that the person who hit this jackpot did so when she risked everything for someone else.