All About Your Pop Culture Personality 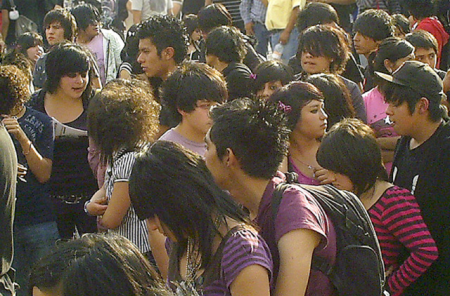 There are plenty of silly tests and quizzes that will tell you what kind of person you are based on your pop culture preferences. But is there any real research on this? Surprisingly little, according to psychologist Peter Rentfrow and collegues who went through some of the major scientific journals on personality from 1932 to 2008 and found that only 0.6 percent of the articles had any words referring to entertainment in their subject headings.

And yet entertainment is everywhere. Americans spend over 9 hours per day watching TV, films, read books or magazines, or listen to music. TV is the major medium accounting for 5.5 of those hours. They spend almost as much money on entertainment as they spend on health care – and no country spends more on health care than America. Most likely, other Westerners are similar in this regard.

They used three samples of participants: 1946 university students (the so-called convenience sample), a community sample of 736 residents of Eugene-Springfield, Oregon, and an internet sample of 545.  They then constructed a 108 item questionnaire called the Entertainment-Preference Measure (EPM) in which they rated the 108 genres or combination of genres and mediums (for instance Romance Books is one item and Romance Film another). They also had participants do an intelligence test and a measure of the Big Five personality factors .

Next, they did their statistical mojo in which correlations between all the 108 genres were compared to see if they clustered into any separate factors, which they did. The major divide was found between what the researchers, surprisingly politically incorrect called Highbrow and Lowbrow. Furthermore Highbrow turned out to consist of two separate factors, named Aesthetic and Cerebral where as Lowbrow was made up of three factors called Communal, Dark and Thrilling for a total of five factors – two fancy and three folksy. To get a general idea of what these factors look like here are some of the major items in each of them,

If we sum up all the major correlations between the above factors and the demographic and personality data, we get some interesting, and sometimes surprising, portraits of different types of people.

The correlations for the Aesthetic preference are fairly predictable. This taste correlated slightly with the female gender, a little stronger with intelligence and education. It was unrelated to race. On the Big Five it correlated strongest with Openness, slightly less with Agreeableness and slightly (inversed) with Conscientiousness.  Looks very much like the typical liberal.

The Cerebral preference was slightly correlated to with the male gender, age and education. It was unrelated to race, and surprisingly, it was also unrelated to intelligence. This may partly be explained by the personality profile; this type was slightly correlated with Extraversion, inversely to Neuroticism (that is emotionally stable), and to Openness. The combination of Conscientiousness and lack of Neuroticism most likely make them very organized and efficient, thus compensating for their average intelligence. This type may correspond to the ISTJ of the MBTI personality measure, a type which has been found to achieve academic success with relatively little intelligence. Closest stereotype would be a nerd although this is also a slightly conservative profile.

The Communal preference was correlated most strongly to the female gender (although these factors emerged independent of gender so there is a male bunch with this taste too). It was clearly correlated with low intelligence and low education. It was slightly correlated with African American ethnicity/race. This crowd is extraverted, agreeable, slightly conscientious and low on Openness. This type of person is very common, which explains why there is always a reality show, a talk show or a soap opera on when you turn on the TV.

The Dark preference was most strongly linked to a young age and to the male gender. There was a slight correlation to Hispanic ethnicity as well as intelligence and education. It is linked to Extraversion, but this was almost entirely due to the facets Provocativeness and Self-Disclosure. Further, they were low on Agreeableness and Conscientiousness and high on Openness.

Finally, the Thrilling preference was most clearly linked to the male gender. It was unrelated to race and there was a slight correlation to low education but there was very little data on intelligence for this type. In terms of personality they were unrelated to all the Big Five factors except for Openness were the younger university sample showed a slight positive correlation and the older community sample showed a slight negative correlation. This is consistent with the trait known as Sensation Seeking which is largely outside the Big Five.

What to Make of It All

There are some obvious limitations to this study. The samples are mainly White middle class. The community sample was 98 percent White – why pick a a town like Eugene-Springfield which has so little diversity? It seems psychologists, who to 95 percent identify as liberals, avoid people who aren’t White middle class like themselves. There is also the question of to what extent minority students are representative of their respective groups. There is a possibility that they are white-washed or perhaps genuinely more similar to Whites than to their own groups.

Still, the racial connections to cultural preferences and personality that were found make sense to me. According to Nielsen, Black people watch more of the light stuff featured in the Communal factor. The Hispanic link to the Dark factor accords with for instance the Mexican Emos, although I don’t know exactly how common they are. I get the general feeling that a lot of latin culture is dark, bizarre and sexual in line with this finding.

More robust was the finding that the highbrow Cerebral factor wasn’t related to intelligence, but the lowbrow Dark factor was. The fact that Cerebral and Aesthetic were correlated (making up the Highbrow factor) suggests that personality may be more important than intelligence in deciding cultural preferences.

Personally, my preferences were a little bit in most of these factors, although I fit the liberal Aesthetic factor best, even though I’m more of a social conservative. They even share my taste for Bluegrass, a genre that originated among White low-IQ people in the Appalachians. Awkward…