The Most Feminine Country in the World

Mars, Venus, and All That

Continuing on the theme of culture and personality, I’ve noticed that social psychologist Geert Hofstede has found Sweden to be the most feminine country in the world according to his theory of cultural dimensions. Apart from masculinity/femininity, these dimensions – that he also views as personality traits, at least judging by his website – also include individualism/collectivism, uncertainty avoidance, power distance (strength of social hierarchy), long-term orientation, and indulgence/self-restraint. But in this post I’m going to focus on the gender dimension in this post. Is Sweden the most feminine country in the world?

As a Swede myself, I think this might be true, but it all depends on your definition of course. Here is how Hofstede defines it on his website,

As all definitions, this one can be criticized. Women have part of achievement too – in a world of global capitalism you may argue that being modest and caring for the weak are big achievements. And men don’t necessarily look for material rewards, as can be seen in the case of for instance psychologist Hans Eysenck, composer Arvo Pärt or architect Antoni Gaudi. But overall, there is probably something to the general idea that men are competitors and doers and that women are caring and cooperative.

One way to validate this dimension would be with measures of gender equality, since we should expect feminine cultures to have more gender equality. Here is Hofstede’s measure compares to the Gender Inequality Index (GII) and the Global Gender Gap Index (GGGI), 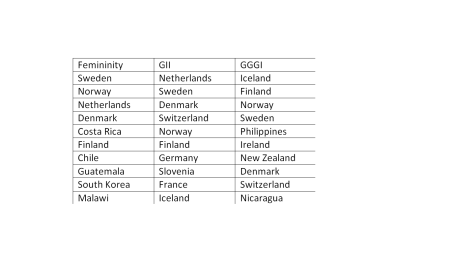 As you can see, there are clear similarities between these indices. The Nordic countries and the Netherlands (which is culturally similar to those countries) make up 5-6 spots of the top ten on all three.  Outside this zone the measures start varying with some European, Anglosphere and Latin American countries. So the Nordic region plus the Netherlands is where femininity is the strongest. I’ll refer to this as the Feminine region from now on.

The Difference between WEIRD and Feminine

This may come as a bit of a surprise since femininity and the related concept of gender equality appear to be an integral part of the Enlightenment legacy that is mostly found throughout Northwest Europe and the Anglosphere, sometimes given the acronym WEIRD (as in Western, Educated, Industrialized, Rich, and Democratic), a region characterized by its civic-mindedness, human rights and lack of corruption. And while the Feminine region is within the WEIRD region it’s only one half of it with the Anglosphere with countries like America, Australia, and Great Britain making up the other half, which is no where near as feminine.

So it seems not all children of Enlightenment are created equal. I don’t think I’ve ever heard anyone explain or even mention this divide (although someone has probably mentioned it). If, as I suggested in my previous post, culture is ultimately the collective manifestation of our individual personalities, this would have to be a mainly genetic divide, perhaps created by different selective pressures within Northwest Europe. One possible explanation would be that farming in the Nordic countries, with its much harsher climate and long winters, would make flexibility in gender roles a fitness trait. The combination of scarcity of resources and the high energy costs of a cold climate means that margins are small even under normal circumstances. If your wife is too ill to milk the cows and your children won’t survive without the milk, then you have to be flexible and sometimes do women’s work.

So, is femininity a good thing, besides for milking cows? Are these countries really more caring and cooperative? A society level measure of caring might be quality of health care. This can be highly subjective since health is made up of many subfactors not always easy to quantify into numbers. And poor health can be largely self-inflicted by people we don’t necessarily think of as weak. To get around these problems I went with child mortality. If we compare the Feminine region with the Anglosphere we also have the benefit of comparing otherwise very similar countries. Acording to a recent report published in the Lancet with estimates of  mortality rates for children under five years of age (deaths per 1000 live births for the year 2013), we have the following, 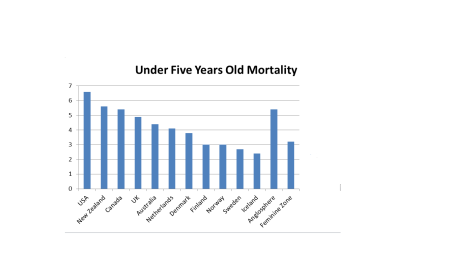 Compared to the Feminine region, the Anglosphere has a mortality rate that is 70 percent higher, and there is no overlap between these groups of countries. It may seem like a small difference compared to sub-Saharan Africa, but it’s striking to have such a difference between rich Northwest European countries (or their descendants).

Udate: Jayman wondered about whether race may be a factor for American mortality. According to CDC, first year mortality per 1000 births for White Americans is 5.11 so it’s roughly on the same level as the rest of the Anglosphere, especially given that the figures above are for the first 5 years. (Black 1-year infant mortality is at 11.42.)

The other main aspect of femininity, cooperation, is something that is found in the political systems of these countries. The Feminine region is characterized by consensus democracy, especially in the sense that these countries have proportional electoral system, lots of political parties that form coalitions and with the ambition of getting broad support for decisions, not just within coalitions but with opposition and other interest groups and institutions. It’s the friendly, inclusive, and cooperative way of governing.

In contrast, the Anglosphere is characterized by the majoritarian model (see the link above) in which countries have fewer parties, form less coalitions with often just a single party in government at a time. The government also focuses more on their own agenda with less concern for and compromise with other parties, interest groups etc. It’s the competitive and take-charge way of governing.

Unlike with child mortality, it’s not obvious which of these models is the better; it depends on the situation and what you look to accomplish. Polls on how content people are with democracy and government do not show either of these models to be more popular than the other. But this offers more support to the idea that the WEIRD countries, while being very similar in other ways, differ in ways that can be described as masculine and feminine.

Overall, femininity seems like a fairly good thing, seeing as how the most feminine countries in the world are wealthy, healthy and democratic.But what happens at the extreme ends of the spectrum? Just as for individual personalities you get crazy and maladaptive behavior. This can be seen in Sweden, where feminism has become so dominant that any critique is viewed as backward-minded bigotry by definition. The lack critique creates a sort of unsupervised playground for all sorts of crazy. According to a recent poll, 2.3 percent of the voters favoured the feminist party Feminist Initiative in the upcoming election to the European Parliament. Here is what one of their leaders said in 2002,

“The discrimination and the violations appears in different shapes depending on where we find ourselves. But it’s the same norm, the same structure, the same pattern, that is repeated both in the Taliban’s Afghanistan and here in Sweden.” 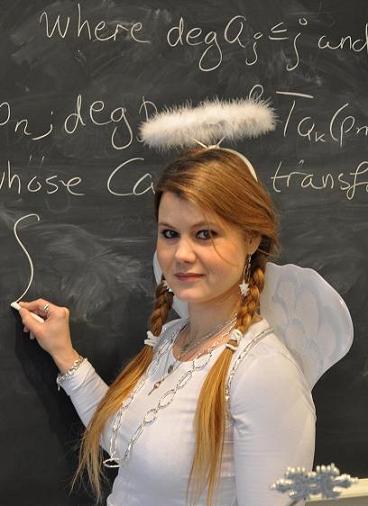 Tanja Bergkvist – The Angel of Reason

But it’s in the academic community that feminism is the most influential and the consensus/conformity is the strongest. A rare example of someone rebelling against the insanity is Tanja Bergkvist, mathematician at the Royal Institute of Technology in Stockholm. In her blog she reports on gender politics that the mainstream media normally don’t care to mention for political reasons. It’s unfortunately only in Swedish but if you’re interested you might try and crunch it through a translator. Otherwise, here are a few goodies from her blog that will show that words like “madness” and “insanity” are in fact appropriate,

This is just 5 out of 213 posts on Bergkvist’s blog and I have in no way cherry picked them; I just took a few of the earliest that were easy to understand for non-Swedes. You might think I’m making this up (or that she is) but see for yourselves, there are links to sources on all this madness. When this happens on the individual level it’s called a personality disorder, but what do you call it on the societal level?

And at the other side of the spectrum of Hofstede’s cultural dimension, Japan scores as the most masculine country in the world. A whole different brand of crazy…