Altruism and the Dark Side of Agreeableness 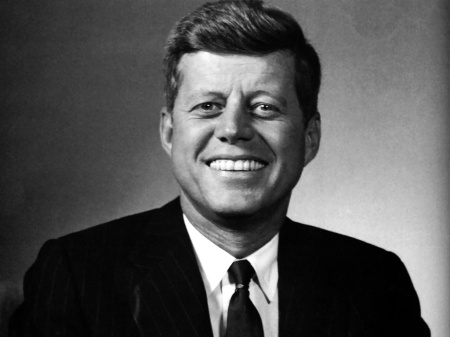 After reading skeptics thoughts on the moral quality of the Big Five trait agreeableness, I began thinking and digging and here is what I’ve found.

The construct of the trait certainly suggests that it’s more than “day-to-day niceness”, as can be seen by its facets,

Looks like a pretty nice guy, right? But this opens the door for social desirability skewing the score. To illustrate this, here are some test items from IPIP,

Cheat to get ahead (reversed score)

Love to help others

Feel sympathy for those who are worse off than my self

It’s pretty obvious that this is the sort of feel-good things people say about themselves. Still, we know that agreeableness correlates negatively to the Dark Triad so doesn’t that give it some validity? Possibly, although these correlations are fairly modest, around -0.4 as compared with the honesty-humility trait of the HEXACO model which is around -0.6.  But more importantly, an average person will probably score higher on agreeableness than a “dark” person and this will yield a negative correlation. But that doesn’t mean that whoever scores high on agreeableness will be a more modest, altruistic or empathic person than the average.

One way of getting around these problems is to look at altruistic behavior directly. One study by psychologist Lawrence Walker and colleagues at the University of British Columbia, examined people awarded for being exceptionally brave or caring. Although they didn’t find many mean associations with personality and altruism they identified three distinct clusters that did. They named these clusters communal, deliberate and ordinary. The communal is what we’d call a Florence Nightingale type who they found was in fact characterized by a high degree of agreeableness, but also of higher conscientiousness and emotional stability (low neuroticism). The second type is a little more ambiguous, scoring high on extraversion and openness. This might be a fire fighter type but it could also be a WEIRD person; Walker exemplifies this cluster with a guy who seems very principled, suggesting the latter. Or it could be a combination: a WEIRD thrill seeker like an environmentalist who will chain himself to a nuclear power plant or something like that. The third cluster is named fairly appropriately since these people score very similar to the control group, but there was a difference in that they scored lower on openness. It’s hard to know what to make of that. Since openness correlates to IQ it could be people with lower intelligence who want to help but fail to understand or contemplate the costs involved.

To summarize, these heroes do not provide convincing support of the association between altruism and agreeableness, although a subset of them score high on this trait.

Another perspective on this issue can be found in a highly interesting study by economists Avner Ben-Ner and Amit Kramer at the University of Minnesota. They’ve used the so-called Dictator Game to examine altruism towards different categories of people as well as its association with personality. In this game one person is given money and then gets to decide how much of it he wants to share with another person. Not much of a game in the conventional sense of the word, but it creates a situation in which it’s reasonable to give something but with no real hint about how much. So the amount chosen would be a measure of altruism.

As an interesting twist, Ben-Ner & Kramer had participants (students) give to four categories: kin, collaborator, neutral person and competitor. This way they can distinguish between kin altruism and other forms, like if someone is thought of as collaborator you may give more in the anticipation that this game will lead to the possibility that the other person will reciprocate – known as reciprocal altruism. Playing against a competitor you’d might not give anything at all.

They found that on the average, people who scored high on extraversion and neuroticism while scoring low on agreeableness and conscientiousness were the most altruistic to all target groups. Openness was unrelated to altruism in this study. They also found that the relationships between altruism and the Big Five personality traits were curvilinear rather than linear, and there were differences depending on who you gave money to as well as shown below, 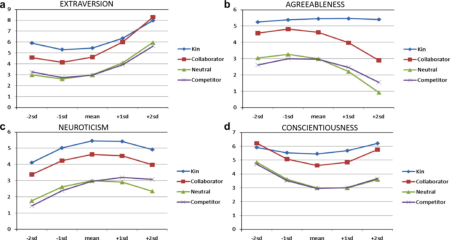 We have something like two U curves for extraversion and conscientiousness and two inversed U curves for agreeableness and neuroticism. But none of the curves are completely symmetrical so we get max and minimum levels of altruism distributed a little differently with each trait. Extraversion shows a minimum level of altruism at around one standard deviation (SD) below the mean and max at two SDs above it and so on. We can also see that these relationships are very similar for all categories of receivers.

But these categories differ in the absolute level of altruism. Participants showed a clear tendency to favour kin (the blue line) over all others, largely independent of personality. This, as Ben-Ner & Kramer pointed out, is what we would expect given that we are products of evolution and kin altruism provides inclusive fitness. But more surprisingly, participants were almost as generous towards competitors as to neutral persons. The researchers speculate on various causes for this, the most likely in my view being that some subjects are “inequality averse or fairness prone”, or as some might put it, WEIRD and pathologically altruistic.

But the perhaps most interesting finding is the dynamics of altruism and agreeableness. Not only is this trait – with altruism as one of its facets – inversely linked to altruism; we also find that the relationship is almost linear with very low altruism at very high levels of agreeableness. This again points to the social desirability of this trait that I mentioned earlier. It also points to a possible link to dark traits; people like narcissists and psychopaths like to convey a highly likable but unrealistic persona. Criminologists and police officers know this – lying excessively about who you are is a warning sign that the person may be a psychopath or something similar.

Another interesting finding is that although kin is favoured there is also a tendency to be relatively altruistic to collaborators, something that makes sense in view of that they would be good candidates for reciprocal altruism. But for higher than average scores of agreeableness, we can see a unique gap opening up between kin and collaborator altruism. This suggests the possibility that behind the agreeable veneer lurks not only selfishness and a potential Dark Triad personality, but also some form of clannishness. Not the in-your-face violent Middle East clannishness, but a smart and sophisticated (this sample was university students) variety; people who act nice and say the right things but who will do nothing for you in the end because you’re not family. People like the Kennedys.

It will be interesting to see if this study is replicated because altruism and clannishness are such important aspects of human behavior and there is still very little research on how they relate to personality.

And beware of really nice people. If they seem too good to be true, they usually are.